The Sovereign Security Company series by Thomas Sewell follows plots and interrelationships with the sovereign security company founded by Sam Harper after he retires from government service, so chronologically after the Sam Harper Military Thriller series. While each book or story is self-contained and can be read on it's own in terms of plot, there is a large continuity in terms of characters and setting. There are some plot points that stretch across books in the series, but it's not required to read earlier books in order to understand the main plot in later books.

Filled with action and adventure, set in the desert along the Mexican-U.S. border in Arizona, Sam must figure out why the local smugglers are hunting him. A story of local corruption, human smuggling, kidnappers, and border truckers in the near future west. Set in the very near future, before the Big Split and well before the events in Sharper Security, it covers the story of how Sam Harper changed his plans from former special operator and beach bum to Sovereign Security Company founder.

The story has many of the elements of a modern western and is dedicated to Louis L'Amour, who has endured many years as one of my favorite writers. 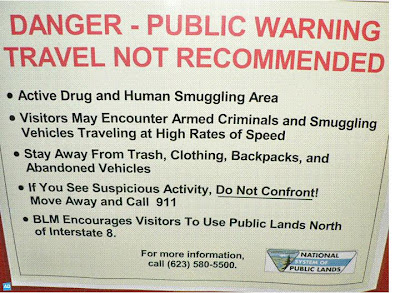 A short story, approximately 50 pages. From a series perspective, this story primarily provides additional background on the character Sam Harper, how he deals with trials, tribulations, setback and disappointment and how his goals change over time without changing his essential character. Postcard of the Francisco Grande, an important location in the Book

The book has elements of action, adventure, mystery and suspense in the tradition of Tom Clancy, Robert Ludlum, and Louis L'Amour. It's set a couple of decades into the near-future with a liberty view of society based on individual choice and free market economics, taken to enough of an extreme to make you consider what's really possible. In terms of Science Fiction, it's always difficult to predict the future, but the technology in the book is stuff we currently know how to make that is possible to become common in the next few decades, but isn't really available right now.

Scheduled for future release, this book will follow Sharper Security's attempt to expand it's customer base into the heart of La Raza Council. Kidnappings and mystery abound and open warfare may or may not be resorted to. A book about exit versus voice, the inner workings of La Raza Council will become much clearer.

What to do next?

Read about the technology and setting of the Sharper Security series.

Want to know what's going on?