Warning: Thar be Spoilers Ahead!

You have been warned!

This scene is a quick introduction of many of the main characters. Pierre ties it into the prologue, while Sam, Shortee, Edmond and John all make initial appearances. There isn't much going on except introduction, but if you read it in retrospect after reading the rest of the book, you'll realize just how much info is packed into it.

For example, the references to:

Pink tents is a reference to Sheriff Joe Arpaio's tent city, complete with pink underwear for the prisoners. 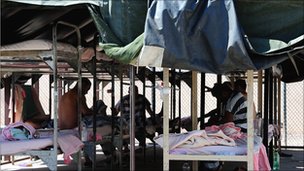 I purchased a baby grand piano from a Pastor in Casa Grande once using craigslist, which led to Sam's reasons for being the one to pickup the prisoners.

The quote at the end of the scene ("different Frenchman's description") is from Alexis de Tocqueville. My family used to live in a town named after him, Tocquerville. You can imagine the various jokes. T-shirts printed with Toquerville university, etc..

Notice also the references to people using their sunglasses as computer displays. Wearable computers tied into expert systems that switch between various displays (HUD, glasses, wall screen) is one of the first near future techs in the book.

I cheated a little here. The scene doesn't actually start on Elliot Road, it actually starts in the jet plane bringing Evie to Arizona Zone. Originally it did, with a flashback to how she got there, but according to my alpha reader (my wife), it worked better to make the events more linear.

The most expensive part of flying in terms of time and fuel is the take-off and landing. Eliminate that and you might be able to achieve more frequent and cheaper flights. It also makes it easier to service multiple locations, rather than either point-to-point flights or hub and spoke arrangements with most people switching flights and wasting time in an airport.

The drop capsule idea means you can carry passengers for anywhere along your flight path without the need for landing.

Here's a similar concept in action:

This scene is the first introduction to autocabs. I picture them as coming in various sizes as needed, but primarily small economy vehicles replacing piloted cabs once self-driving vehicles get all the issues worked out of them. This is one of the technologies I can see taking over quickly once they're available. Apparently Google does too.

This is about the spot I picture for Eurotrash to be located, with some open space for building something new:

The name Eurotrash is a play off of a term and a song. After 20 more years, I figure it'll have had enough time to turn into something more positive, the way terms go in and out of fashion.

Hopefully the fact that a consular notary is combined with a party supply store communicates that this is a private establishment, not something government run.

A remake of this popular song from the 90's is what's playing in the background. By then it may be the equivalent of Muzak piped into stores. Bit of a subtle background reference there for Evie and the store name.

Some of Evie's comments about Arizona Zone (traffic, roads, dust, trees, scared to drive) are tied to comments from a friend's ex-wife who was visiting from Jersey. The English Island, not the "new" version in the U.S.

Because Evie is new to Arizona Zone, I can have her give an outsider's perspective on things. Obviously, she doesn't get it all right-off, but it's useful for explaining how things work to you, the reader, to have her figuring them out and asking about them. Hopefully it came across fairly naturally.

I work with a software vendor that has a French HQ, so for Pierre's accent and mannerisms I had a few examples from my daily life to draw on, but it's been a few years since we had some Brits visiting us for a soccer camp. So for French, I could just replay recent conversations in my mind, but not so easy for a South Croydon - London accent.

Trying to get Evie's accent and attitude right, I spent most of it researching online, including accent video's on Youtube, etc... I also watched a couple seasons of Undercover Boss - UK Edition. Mostly tried to pickup on the common expressions, pattern of speech, etc...

One of the things that suprises visitors to the U.S. is the house size, especially newer houses out west. The average house size in the UK is about 1/3 the size of an average house in the U.S. Australia/New Zealand/Canada are the only other countries close to the U.S., so it's probably a cultural thing from having tons of open land available and plenty of wealth. Many folks in Britain just can't imagine what it's like to be in a country so large. The U.S., Canada and Australia are each closer to the size of all the continent of Europe than they are to the Island of Britain.

Obviously, without a central government, someone owns the roads. A likely result for local roads would be a local co-op that the land owners, who have the biggest interest in access, would form. Also, you need protection, so hiring a security company makes a lot of sense. The options Evie picks play a larger part in the end of the story.

The first day ends with a quick introduction to La Raza Council. There will be more history of La Raza Council in the second book, as it focuses on them in the Tucson area. Victor Tejada is also a much larger character in that book, so we may hear from his mayordomo again.

A couple of readers wanted it to say majordomo instead of mayordomo. Majordomo would be French. The spanish version of mayordomo is not only more accurate to how spanish speakers would write it, but also gives it a closer flavor in my mind to how it would sound in the proper accent.

Of course, I mostly learned Spanish working on construction sites and playing in futball games in Southern California, so I tend to be more familiar with the words you shouldn't use in polite company.

I'll have more on the Francisco Grande in my notes on the end of the book, but my wife and I have stayed there several times and it's very nice. It's a great atmosphere and only 20 minutes or so from my home, perfect for a staycation when you want to leave the kids home with only a teenager babysitting.